A Few Thoughts on Chrome

I'm just reading through the comic and thought I'd jot down a few things I notice as I go. Take them for what they're worth, high-level opinions.
Overall I'm sure it will be a really excellent browser that I may or may not use. Partially because Google's client app support is basically nonexistent for OS X (how long has Google Talk been promised for OS X?), and partially because...I dunno...I feel better using a browser not designed and controlled by an ad-funded megapower. I'd rather not allow Google to control the vertical AND the horizontal. Not that I have anything against Google in general. This blog is hosted on Google-powered Blogger, I use Google for search pretty much exclusively, and I host services for my personal domain headius.com on Google as well. But it seems disingenuous to say Chrome is supposed to "help everyone" and yet nobody gets to see any of it until they're in beta. I guarantee Firefox folks would have started integrating portions as soon as the code were opened up, which of course would have taken some steam out of the eventual announcement. Try to look past the fireworks and bluster, folks.

And I reserve the right to completely flip any of these opinions after the beta is released this evening...though I probably won't, since I can't run it (Windows only).

Update: I borrowed a friend's Windows machine to give Chrome a 15-minute try. Here's my additional 15-minute thoughts, so take them at face value. 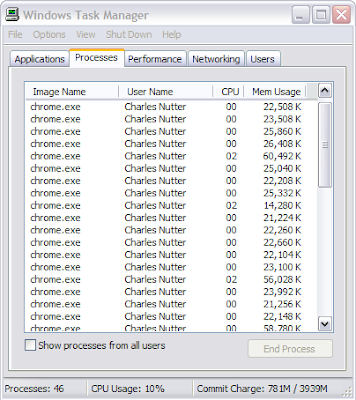 All told it's about what I expected. Very clean, very polished, very young. I'm sure a lot of these issues will get shaken out during the beta. I do hope there's a way to turn off a tab-per-process, or I can't see myself ever wanting to run Chrome. I can see myself gathering several dozen Chrome processes in the course of a week. Process isolation for other aspects (like JS or plugins), no worries. I'm looking forward to an OS X version, and from looking at the Chrome developer pages it sounds like that isn't too far off. Perhaps marketroids pressured the team to get out a Windows version first, so they could make some headlines. Damn marketroids.

And as regular readers of my blog will tell you, I can be a bit salty about young up-and-coming technologies with a chip on their shoulders. Ignore that.