Ok, so I intentionally made my last post a bit of a "tease". You can't fault me for trying to drum up a little buzz, yeah? And hey, I spent almost as long fiddling with that logo as I did hacking JRuby to run on Android. Here it is again, just for good measure: 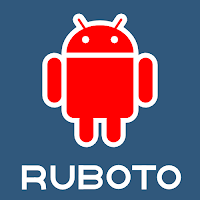 On Monday night, the local Ruby group (Ruby Users of Minnesota, or RUM...great buncha guys) hosted three talks: one on Android development, one on iPhone development, and one on migrating from Struts to JRuby a bit at a time. The Android talk kinda hooked me, even though I was working on last-minute JRuby 1.2RC1 issues and not really paying much attention (sorry, Justin).

I'd considered getting JRuby working on Android before, since it's compatible with most Java 1.5 language features, has a much more extensive library than any of the Java ME profiles (which hopefully will be remedied in future ME profiles), and represented the best chance for "mobile JRuby" to date. I had tweeted about it, scammed for a free G1 phone, and briefly browsed the online docs. I had even downloaded it back in early January...but I'd never bothered to try.

So late Monday night, I tried. And about an hour later it was running.

There's really two sides to the Android SDK. There's the drag-and-drop fluffy-stuffy GUI in the form of a plugin for Eclipse. That was my first stop; I got it installed, created a sample project, and ran it in the emulator. It worked as expected, and I'll admit it made me want an Android phone a bit more. I'll be the first to admit I've been skeptical of Android, but at this point it's hard to argue with a totally open platform, especially since it has a shipping device now. So yeah, SDK plus sample app was easy and appetite-whetting.

Then I tried to pull in JRuby's main jar file. Nothing seemed to work right. I got errors about not having defined an "application" in some XML file, even though it was there. There was no obvious information on how to add third-party libraries to my app, and I certainly may have done it the wrong way. And of course my lack of knowledge about the structure of an Android app probably didn't help. But ultimately, since I didn't really need a full-on application, I started to dig around in the SDK for "another way".

Not one for reading documentation, I immediately started running the executables under "tools" with --help and guessing at combinations of arguments. Immediately I saw "emulator" and started that. Yay, an emulator! Then I saw dx, which looked intriguing. A-ha! It's the tool for converting an existing class or jar into Dalvik bytecode. A bit more fidding with flags, and I finally found the right incantation:

For the newbs: that's -JXmx1024M to allow dx to use up to a gig of memory, --dex to convert to Dalvik bytecode, and --output to specify an output file.

So, suddenly I had what I assumed was a Dalvik-ready ruboto.jar file. A quick jar -t confirmed that everything appeared to be there, along with a "classes.dex" file.

There were also a bunch of warnings about "Ignoring InnerClasses attribute for an anonymous inner class that doesn't come with an associated EnclosingMethod attribute." but warnings don't stop a true adventurer. I pressed on!

So, the next step was getting it into the emulator, eh? Hmm. Well there's no "upload" option in the emulator's OS X menu, and nothing obvious in the Android UI. There must be a tool. Like maybe a debugging tool of some kind... like a "jdb" but for Android. Hmm.....this "adb" executable looks promising...

Ahh, bingo. And one of the adb subcommands was "push" for pushing files to the device. A few minutes and experiments later, I figured out incantation #2:

Or at least, I almost had it. Obviously the device was being closed-minded about the whole thing. So back to adb to run another subcommand and have a look around:

Hmm. "data". That looks promising. I mean, a "data" directory couldn't possibly be read-only, right? So let's give that a try.

BING! We have liftoff!

Ok, so we've "dexed" the jar, uploaded it to the emulator, and now we want to run it. Back into the shell we go!

There's obviously an sbin above, but it's pretty slim:

Another debugging thingy I suppose. Maybe I'll have a look at that later. What about under "system"? I've gotten used to the bulk of my system living under something called "system" from running OS X. And as in that case, "system" was much more populous, with a bin directory containing all sorts of goodies. However one of them jumped out at me immediately:

Oh, goodie, "dalvikvm". Could it possibly be the equivalent of the "java" command on a desktop? Could it really be that easy?

It could! My hands began to tremble. My heart began to pound. Could I simply do

And expect it to work?

Curses! Ignoring for the moment how strange it seemed to have a -jar flag that simply doesn't work, I tried specifying -classpath and org.jruby.Main.

It blew up with my first official JRuby-on-Android exception!

Hmm. The code in question simply iterated over an EnumSet. After thinking through a few scenarios, I concluded this was not JRuby's fault. It seemed that I had discovered my first Android bug, the first time I tried to run anything on it. And that made me sad.

But only for a moment! The code in question turned out to be unimportant for a normal application; it was simply iterating over a set of Errno enums we use to report errors. Commented it out, and I was on to my next issue:

Ok, VerifyError because of missing JMX stuff...that's no problem, I can just disable it for now. So, one more attempt, and if it fails I'm going to start doing iPhone development I SWEAR.

Ok, so we all agree Android dodged a bullet there. But what's the real status of JRuby on Android?

It turns out there were very few changes necessary. I fixed the EnumSet stuff by just iterating over an Errno[] (EnumSet was not actually needed). I fixed the JMX stuff by creating a BeanManagerFactory (yay GOF) that loaded the JMX version via reflection, falling back on a dummy if that failed. And I fixed some warnings Dalvik was spouting about default BufferedReader and BufferedInputStream constructors by hardcoding specific buffer sizes (I think Dalvik is wrong here, and I'm arguing my case on the android-platform ML). And that's really all there was to it. JRuby pretty much "just worked".

Of course you see the "could not compile" error up there. What's up with that?

JRuby normally runs mixed-mode, interpreting Ruby code for a while and eventually compiling it down to Java bytecode if it's used enough. But we do try to immediately compile the target script, since it doesn't cost much and gives you better cold-start performance for simple scripts. The error above was simply JRuby reporting that it could not compile my little -e script. Why couldn't it? Because the JRuby compiler is generating JVM bytecode, not Dalvik bytecode. Dalvik does not run JVM bytecode. Here's the actual error you get:

So that's caveat #1: this is currently only running in interpreted mode. To avoid the compiler warning, you can pass -X-C to JRuby to disable compilation entirely.

Unfortunately, interpretation means JRuby is none too fast at the moment. That may not matter if you're scripting a "real" app, but we'll definitely find ways to improve performance soon. That may mean providing an all-at-once compilation tool for Ruby code (we have an ahead-of-time (AOT) compiler right now, but it's per-file, and still expects to generate some code at runtime), or it may mean a second compiler that generates Dalvik bytecode. Either way...it's coming.

Caveat #2 is that a large number of libraries aren't working, especially any that depend on native code:

And so on. There's nothing to say these libraries can't be made to work, but they're not working yet. And thankfully, our most important library seems to work fine:

And that leads me to caveat #3, better demonstrated than explained:

Bummer, dude. There seems to be some feature (i.e. a bug) preventing some Android core classes from reflecting properly, which means that for the moment you may not be able to access them in JRuby.

Overall, I think it was a great success. We obviously weren't doing anything in critical JRuby code that Android could not handle. Kudos to the Android team for that, and kudos to us for still supporting Java 1.5. But success in software only leads to more opportunities:
The Bottom Line

JRuby works on Android, that much is certain. The remaining issues will get worked out. And I dare say this is probably the best way to get Ruby on any embedded device yet; after dexing, it's literally just "upload and run". So there's a great opportunity here. I'm excited.

And just one more example to show that not just JRuby itself, but also Ruby libraries that ship with it work (using the "complete" JRuby jar in this case):